Farm Innovation Visits is an exciting new scheme that will give farmers the opportunity to visit farms across the UK or Europe and gain first hand experience of on-farm innovative approaches. Each trip will focus on innovations within a specific sector which are not currently practiced within Northern Ireland’s farming industry. 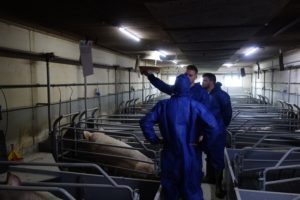 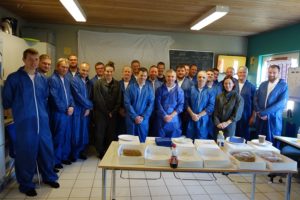 The first trip under the new Farm Innovation Scheme took place in late November, where 14 pig farmers from Cookstown along with veterinary specialists, Geoff Thompson from the UFU, CAFRE Pig Advisor Mark Hawe and Facilitator Sophie Tyner visited the Odense region in Denmark. The focus of the trip was to learn how the Danish pig industry has not only successfully controlled but eradicated Porcine Reproductive Respiratory Syndrome (PRRS or Blue Ear) from some areas in Denmark.

The group travelled by bus from Cookstown to Dublin Airport before flying nearly 800miles to Copenhagen where they then travelled a further 100miles to their hotel situated on the outskirts of Odense.

The first day of the trip was based in the hotel where three veterinary experts from the ‘Porcus’ vet practice gave their experiences on PRRS control and eradication. As well as these, a farm manager from a 2000 sow unit explained how the control programme worked in practice on his unit. All speakers gave practical examples of changes that could be implemented to help the control of the disease on Northern Irish farms. The speakers repeatedly referred to the ten golden McRebel Rules. These are 10 practical steps that should be put into practice on farms to ensure successful eradicate or control PRRS.

The small group size facilitated discussion between speakers and farmers who were very forthcoming when it came to asking questions or contributing.

Day two was an early start with the bus leaving at 6.45 to go to ‘Grondale’ Farm, which had successfully eradicated PRRS. This high health pig unit had 2000 sows achieving an average of 35 pigs per sow per year. Before PRRS eradication the mortality of weaners on the farm was 7% and this has now fallen to 3% since successful eradication.  The benefits were not only enhanced animal health and welfare standards, but also improved financial returns.

After a short presentation and some introductions the party split into two groups and each had a tour of the whole pig unit. The farmers got to see first-hand the practical application of the practices put in place to eradicate the disease as discussed the previous day.

The group returned to the hotel, for a re-cap session to reflect on what they had learned and to consider if it would be applicable on farms in the Cookstown area. It was accepted that eradication was probably not possible due to the density of pig farms in the Cookstown area and the number of pigs coming though that area to be slaughtered at the Karro slaughter plant. However, the farmers were in agreement that control of PRRS at a farm level would be possible if they coordinated their efforts.

Further information on the visit is available by clicking the below link;

If you would like to find out more about Farm Innovation Visits or apply to participate in one please click the link below for further information and contact details;